Young couple is rehabbing a classic Airstream so they can hit the road, inspire people of color 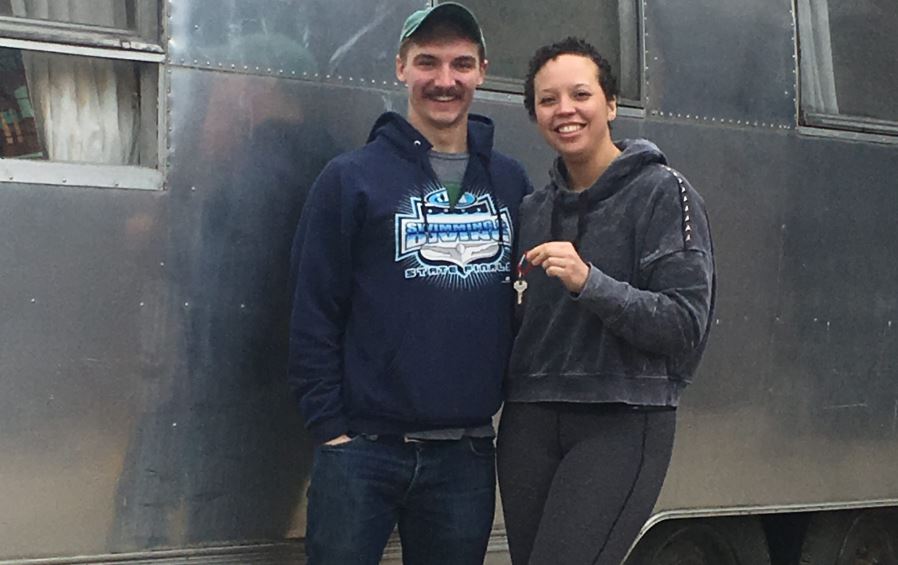 Lindsey McIntyre and Tyler Cox clearly love and respect each other. They revere their relationship and draw strength from their partnership. Simply put, they are good together. Now, as partners, they are about to embark on a bold adventure.

The couple plans to quit their jobs and hit the road next spring in a classic travel trailer for a year-long tour of America to, in part, pick a new place to live. 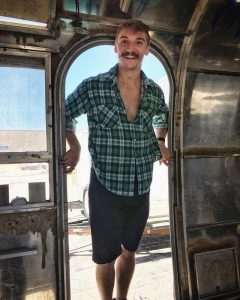 “Tyler is hard at work on our 1968 26-foot Airstream Overlander,” explained McIntyre during a recent interview in their St. Louis home.  “He gutted it so we could change the floorplan.”

“Plus the ladder body frame and original floor needed work,” added Cox. “Twenty-five percent of the front had some damage from a serious accident and had to be rebuilt.”

Cox and McIntyre removed the flush toilet and blackwater tank and installed a composting toilet in their place. They haven’t decided whether to polish the trailer’s aluminum exterior. They hope to finish the build as soon as possible and plan to live in it as much as they can before hitting the road. During the build, the couple gave away most of their possessions and has been staying in small Airbnbs to help them adjust to tiny living.

“Giving stuff away was pretty painless, really,” said McIntyre. “I don’t miss the clothes. I have five dresses and five shirts now and it’s enough.”

While scouting the country for a great place to put down roots, Lindsey and Tyler “hope to work with lower socio-economic status people; helping to show them that you can have a very fulfilling life with minimal possessions,” said McIntyre.

“There are so many people living in poverty, who think they will never get out of it. My goal is to reach people in the community – especially people of color – to show our community how my partner and I live a very full life on a tiny budget – smaller than the one they are living on now. So many people get swept up in keeping up with the Jeffersons and Joneses, and I want to show people how that life may lead to debt, struggle, and unhappiness,” said McIntyre.

“We launched Vivarium Consulting to consult on tiny-home, particularly Airstream, builds and living minimally and debt-free. On how to live a fuller life with less stuff,” explained McIntyre, who will serve as the brand’s CEO. Cox will be the COO. 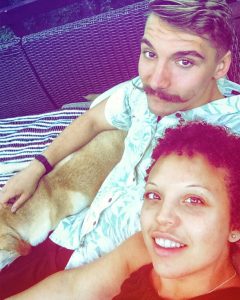 “I’m biracial, black and white,” said McIntyre matter-of-factly. “Tyler is Caucasian. Growing up I struggled with finding my identity and beneficial resources. Like others in my cohort, I didn’t have the support that I needed at home and ended up 17 and pregnant in high school. I knew that in order to give my child the things I didn’t have, I needed an education and a support system. So, I spoke with my Aunt, who helped raise me, and asked if she would be willing to help raise my son while I finished college. Thankfully, she said she would love to. I was able to get a BA in psychology and neuroscience from University of Missouri-St. Louis.  I loved college even though it took me eight years to finish since I went part-time, worked, stopped for a bit, and went back. I was a first-generation college student and learned a lot of life lessons during that time, such as the necessity of making sacrifices and tough decisions in order to have a better life for yourself and those around you.”

“There aren’t a lot of people of color in the tiny house movement,” said Cox. “We can see that from the outside. St. Louis, like many cities, is very segregated. Among the black population, the RV world is thought of as white and redneck. We want to show people, especially low-SES, that this is for all people.”

“I didn’t spend a lot of time outdoors growing up,” said McIntyre. “Didn’t visit National Parks. Race seems to limit opportunities in general and camping seems to be one in particular. Camping is a way to explore on a budget.”

“I graduated college and moved to St. Louis after Lindsey and I met on Bumble while Lindsey was traveling in my home town in Illinois,” said Cox.

“Tyler has always been pretty nomadic and a minimalist. He was going to do van life and travel before we met. I always loved to travel. I lived in Morocco for a year studying Arabic. We want to start in the Pacific northwest and travel down the coast. This will give us time to check out each community as we go, and if we see a place to land, we’ll buy land and Tyler will build us a house, but it will be small. We will live in the Airstream until we find a home and then we’ll probably rent out the Airstream via Airbnb,” said McIntyre.

“We’re going to live partly on savings and partly on remote, part-time, freelance work. We have opportunities to make money,” said Cox. “Lindsey is getting her master’s degree so that she can work remotely and hit the road.”

McIntyre will complete her degree in spring of 2019 at Washington University https://wustl.edu where she also conducts neuroscience research.

“We think Tyler will be picking up casual work, including, perhaps, working as a lifeguard instructor. We estimate our monthly costs will be cut by half. To reduce our gas consumption, we plan to stay each place for two weeks to a month, depending on how much we like a place. We want to really get to know places and towns,” said McIntyre.

“Keeping food to eat inside the camper is a huge deal,” said McIntyre. “We like to grow our food, but that will be hard to do on the road. We plan to eat local as we travel, but eating out will be minimized to save money,” explained McIntyre.

“As a child, I didn’t know it was okay to be black or bi-racial. I know that is a crazy statement, but growing up there were so many things that happened to people around me just because of the color of their skin. My family tried to protect me by straightening my hair and passing me off as white. My grandparents would keep shotguns in the house just in case. This spilled over into my teenage years. I still looked bi-racial but having blue, green eyes was unheard of around the area at that time. It was enough to pass me off as white in most circles. As a teen I didn’t know who I was and what I wanted in life. There were so many things I hated about myself growing up. I hated that my hair was “nappy” when it wasn’t relaxed and flat-ironed. I was jealous of women who had super straight hair. I didn’t have any role models that looked like me or that could really help me understand being bi-racial. I had role models, but they were either white or black, not both. A huge goal of mine is to be a role model for those who still struggle with identity issues,” said McIntyre.

“I am a woman of color and that includes both black and white. I am now proud of my natural hair, my skin, my eyes, and all the aspects that make me who I am. I hope to help others find this acceptance and appreciation for themselves as well. And,” said McIntyre, “I hope to inspire at least one person that you can have more with less.”

Lindsey and Tyler will showcase their Airstream and present their story to attendees at the Mid-Atlantic Tiny House Expo Maryland, which will take place October 6-7 in West Friendship, Maryland.