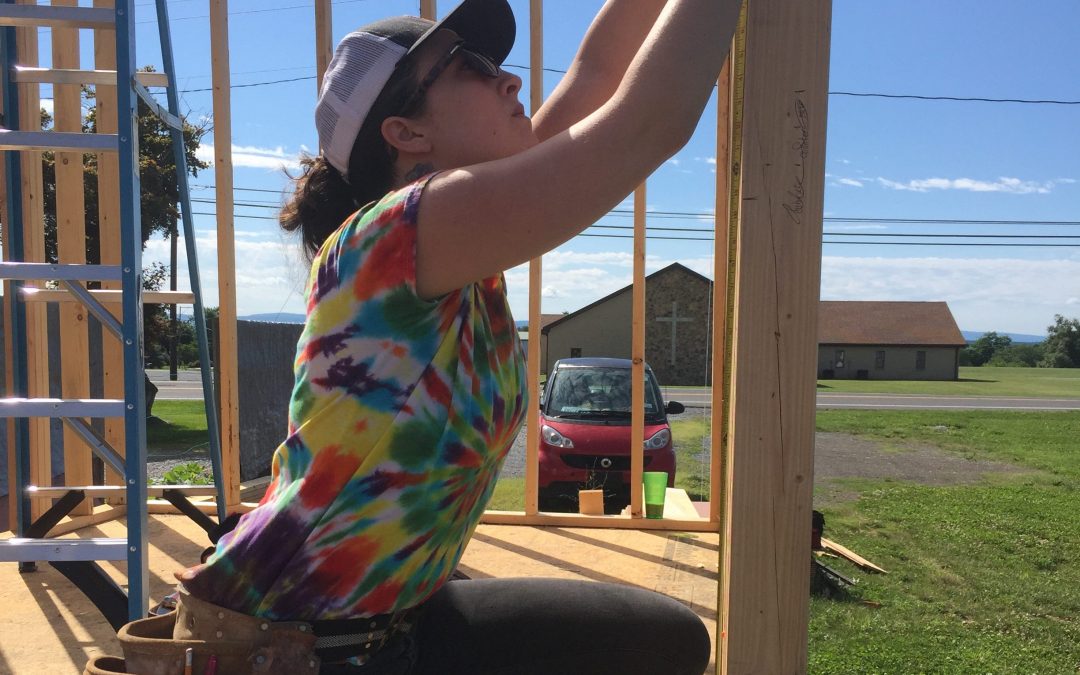 “It all started as I was watching tiny houses on TV,” said KT Ehrlinger (pictured), owner of Dream Tiny, a tiny house company that she recently launched. “For a year my mom and I would get all giddy about the possibilities. We loved to discuss what our DIY tiny house would be like, what we would build if given the chance.” 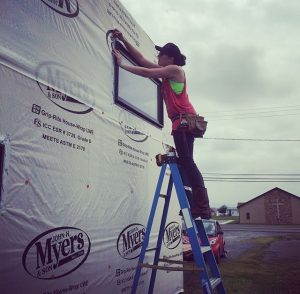 “I have a culinary background. I was managing a kitchen for Whole Foods, but I was bitten by the bug. I had to start building a tiny house. It took us a year and a half because I was only able to work on it two days a week,” recalled Ehrlinger. “An architect friend drew up beautiful blueprints, I ordered the trailer, and everyone in my immediate family laid hands on it in one way or another.”

Many of Ehrlinger’s family members work in the construction industry. Her father teaches 3D AutoCAD, her mother used to be a general contractor and now does home inspections, and her brother is a contractor who specializes in framing.

“Mom and I started building it in the driveway next to the barn along a busy road in a small town,” said Ehrlinger. “There was so much interest. People kept stopping to watch two women build a tiny house. Even the minister from the church across the road came by. And a lot of people offered to help us.”

That foray into tiny house construction fanned a passion in Ehrlinger. She decided to make it her vocation.

“I’m still working on my business plan,” said Ehrlinger. “I’m a Jack of all trades, so this might be a consultation business where I help people get connected to the right resources. Or, it might include building houses for customers. The one I built is for sale. If it sells, I’ll be a little sad to see it go, but I’ll build another one.”

“I want to help people along each step of the way. I am comfortable traveling to be a DIY consultant. I’ve learned a ton and would like to help others with their THOW projects. I know which resources work for each application,” said Ehrlinger.

Erhlinger plans to subsidize her income for the time-being as a real estate agent and landlord.

“My boyfriend recently has been doing a lot of work on a boat and I am amazed by how many design elements are applicable to a tiny house build. Some of it is just simple stuff that could be included in a tiny,” said Erhlinger. 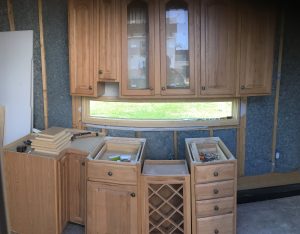 “I’m a princess and that’s how I build homes,” said Erhlinger with a chuckle. “I preserved some wall space for artwork. I put windows in places where they wouldn’t get in the way yet would give plenty of light. One example is a window for a backsplash in the kitchen.”

“The deck is 28 feet long,” said Erhlinger. “The finished house is exactly 8’ 6” wide, and 13’ 5” tall. The trailer has three axles. I bought it from Tiny Home Builders and it came from Canada. It has an exterior metal flange that runs the entire perimeter that we used for attaching the framing to the trailer with hex bolts. We used corrugated metal as a pan underneath, and Leed-certified, denim-jeans insulation.”

“Lofts are difficult for tall people. I’m 5’ 10” and I couldn’t imagine myself in a tiny with a loft. So, I wanted a main-floor bedroom. I like to jump out of bed and stand up straight. The living room converts into a bedroom. I used an Expand Furniture queen-size Murphy bed that folds down over a sofa. The bed is operated by hydraulics, so anyone could raise and lower it,” explained Erhlinger.

KT has agreed to bring her DIY tiny house to the Mid-Atlantic Tiny House Expo, which will take place at the Howard County (Maryland) Fairgrounds, October 6-7, 2018.