Carmen Shenk, the Tiny House Foodie and author, will bring her skoolie and new book to Fredericksburg show 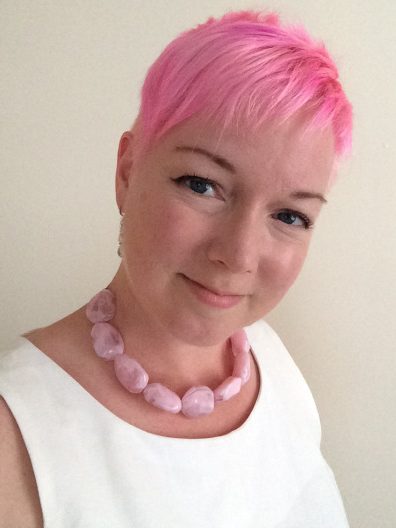 “I’ve worked in bakeries all my life. I literally grew up in a bakery. That was my first work experience,” said Carmen Shenk, the Tiny House Foodie, during a recent interview inside her skoolie near Harrisonburg, Virginia.

Shenk who lives with her husband, Xaver, an Austrian-born pipe organ builder, is a renaissance woman who dabbles in myriad things at once.

“Xaver and I have chosen to live off the beaten path in various ways. We drive cars that were built before computers were put in vehicles. Easy to repair. No airbags. Simple, you know? Our skoolie is the most modern thing we own. Even though we appear to be a pretty conventional couple, we choose to live outside the system in many ways,” said Shenk. “Now we focus on our pipe organ company, Geshenke.  Xaver built the industry’s first exclusively glass pipes.”

“When I met Xaver he owned a deli/convenience store. We renovated it into a restaurant. I was the pastry chef. We ran that for a while but in the end, it became too much with him on the road fixing pipe organs much of the time,” said Shenk. “We sold the restaurant.  Now we are free of that hectic schedule and with that freedom we have more time for ourselves. It has reminded us why we got married in the first place.”

Carmen and Xaver recently sold a 125-square-foot tiny house and currently have a temporary bedroom in their business workshop. They also have an in-progress skoolie that will be their new home. 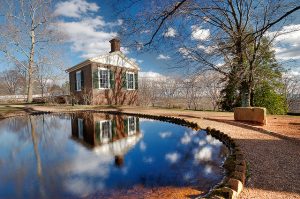 “Our skoolie came from Monticello, as in Thomas Jefferson’s home,” said Shenk. “It spent its working life as a shuttle bus running circles on the Monticello grounds and never went above 35 MPH. Getting a bus from Monticello is fitting because Jefferson was a tiny house dweller at one time. He bought the land at Monticello and first built a one-room house that became known as The Honeymoon Cottage (see photo). Later he built that now-famous mansion. We decided to leave the exterior of the bus as it was to keep it inconspicuous. We don’t want to draw attention to ourselves when we’re stealth camping. I could live in a skoolie full time. It’s a great way to live.” 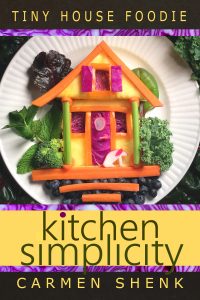 Shenk recently completed a book, Kitchen Simplicity, that she plans to unveil at the Mid-Atlantic Tiny House Expo in Fredericksburg, Virginia in May.

“It seems like a lot of folks who look at tiny house living get freaked out thinking about whether they can continue to cook their favorite meals. The book is intended to help people through the transition. You put your big house on the market and it sells and then it becomes very real that you’re going tiny. There might be a moment of panic and the book is designed to help you thought that,” explained Shenk.

“It’s not a cookbook. It doesn’t have any recipes. It’s very philosophical. It doesn’t qualify as a memoir, but it conveys a lot of my personal experiences.”

“Give up your attitude first. If self-pity is your thing, it might not work. This is my home. This is a place I’m grateful for. I am lucky enough to live in close proximity with love ones. We have $15 utility bills, no mortgage and $50 per month lot rent. We have more free time than you probably do. A more flexible schedule. We can drop everything and go do something we really like to do,” said Shenk about life in a small space.

“I can’t do everything in my house at the same time. But that’s not a loss. It’s not really a sacrifice, it’s just part of the process,” said Shenk. “I don’t really need alone time as much as I need quiet. I don’t mind being with my husband as long as we’re quiet sometimes. He respects that.”

“I don’t think this is a fad. People have been living in tiny houses around the world forever. I think tiny house living will redefine what a starter home is. It will become a means to an end. I think it will also be a permanent way to live for some people. Minimalism and simplicity are reactions to materialism. Tiny living is an effort to seek balance, equilibrium. Tiny houses are a new incarnation an old way of living. It’s a way for people to acquire a space of their own. A quality of life. Sunlight. And it’s less of reminder of one person’s poverty and another person’s wealth.” said Shenk.

“It’s apples and oranges,” said Shenk when asked to compare tiny house living options. “With van life you don’t have to build the shell. It’s ready to go. It gets you to the finish line faster. On the other hand, it will be hard to argue that a skoolie or van isn’t an RV. It’s always going to be viewed as a motor home. Skoolies and vans do, however, make moving from one place to another a little easier. And, especially with a van, you can live in plain sight – stealth living is possible in a van whereas a cute little tiny house will get massive and immediate attention no matter where you stop it.”